Boy George Waiting To Be Allowed Back In To U.s. To Start Culture Club Tour 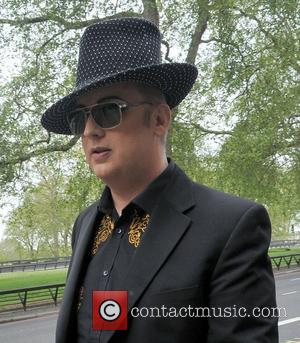 Boy George has confirmed the Culture Club reunion tour will take place once he is allowed back in the U.S. following his 2005 drugs arrest.
The 80s band planned to reunite and hit the road last year (11) to mark the Karma Chameleon hitmakers' 30th anniversary, but the trek never materialised.
Now frontman Boy George insists the group wants to kick off the jaunt in America, but he will only be able to work Stateside when authorities allow him back into the country. He was famously arrested in New York in 2005 when police discovered cocaine in his apartment after he falsely reported a burglary. He was sentenced to five days community service and fined.
The singer tells Britain's Daily Express, "(The reunion) is definitely going to happen, probably next year. We've written stuff and been in the studio. But we want to start in America and at the moment I'm not allowed in America so I'm waiting to get my visa.
"Our original producer Steve Levine is working with us. It's gone full circle and we have all the original members which is really great."