A Representative For Britain's The Voice Has Played Down The Furore Surrounding A Quip Boy George Made About Sleeping With Prince, Insisting The Singer Was Joking. 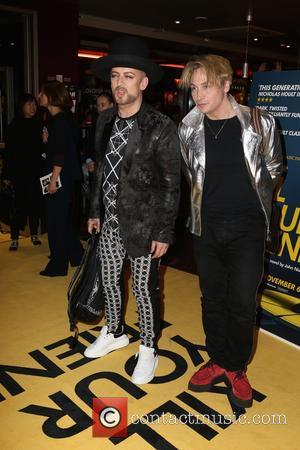 The Culture Club star hit headlines on Friday (30Oct15) after allegedly stunning his fellow judges and the studio audience with the racy admission during a recent taping of the hit show.

The comment was made as the 54 year old and fellow panellists Paloma Faith, will.i.am and Ricky Wilson chatted about the most famous people they had collaborated with.

Boy George said, "I have duetted with some of the greatest soul singers in history including Luther Vandross and Smokey Robinson", with Paloma responding, "Well OK, if we're throwing big soul names out there, I've performed with Prince."

Tabloid reports suggested the bombshell admission prompted crew members to halt filming and race to the singer to discuss his comments.

"Production staff had to come up on stage and speak to them," an onset source told The Sun. "After that, Boy George started backtracking, saying he hadn't really slept with Prince and that in reality, he just had his poster on his wall. But as far as the crowd were (sic) concerned the cat was already out of the bag."

Now a spokesperson for The Voice U.K. has moved to clear up the claims, defending Boy George's cheeky chatter as just a joke.

"He just went, 'Oh darling, I've slept with him,'" the rep tells People.com. "He went on to say that he had Prince posters on his wall as a kid. He was never being serious."

The publicist goes on to insist filming was never delayed, as widely reported, adding, "(The) whole drama of the show coming to a halt didn't happen at all."

U.K. fans will have to wait until January (16) to view the drama for themselves.

A spokesperson for Prince has yet to comment on the controversy.