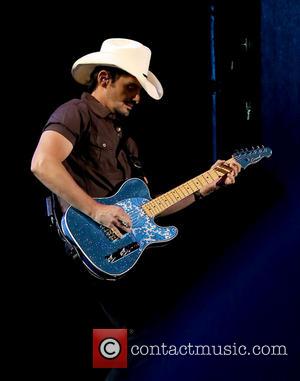 Country star Brad Paisley was left speechless during a show in Bangor, Maine on Sunday (15Jun14) when the wives of two soldiers he met in Afghanistan on Memorial Day weekend (25May14) showed up with cardboard cut-outs of their husbands.

The patriotic Celebrity singer jetted off to perform for U.S. troops with President Barack Obama last month, but had no idea he'd be coming face to face with two heroes over the weekend.

The wives of Sgt. Kelly and Sgt. Gross held the heads and torsos of their husbands high above their heads as they stood in the audience at Paisley's show.

Posting photos of himself collecting the cardboard likenesses and posing with them on his Twitter.com page on Monday (16Jun14), the country singer wrote, "Crazy to play for the soldiers 2 weeks ago in Afg. (Afghanistan) & then their significant others here at home. Sgt.Kelly &Sgt.Gross... Come home safe Flat Daddies!"