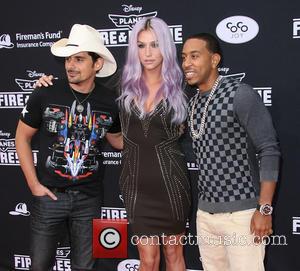 Country music star Brad Paisley has dedicated a song to an American doctor infected with the Ebola virus after the medic's selfless actions moved the singer.

Dr. Kent Brantly was flown to Atlanta, Georgia on Saturday (02Aug14) to receive specialist treatment after contracting the deadly illness while working for a charity in Liberia helping patients.

Later that day, the Celebrity hitmaker paid tribute to Brantly in a series of posts on Twitter.com and dedicated a previously unheard bonus track to the medic.

He writes, "Pray for Dr. Kent Brantly - one of those brave souls who risks his life to save others... I'm moved by the Christian Dr. Fighting Ebola who gave the serum to his friend. So Here's a bonus track. For him."

It was initially reported Brantly had refused an experimental serum as part of his treatment in isolation at Atlanta's Emory University Hospital because their was only enough for one dose, which was given to another American battling the virus.

However, subsequent reports claim he did receive a dose and appears to be approving, according to a spokesman for the U.S. Centers for Disease Control and Prevention.