Country Star Brad Paisley Invited Famous Friends Carrie Underwood And Rocker Joe Walsh To Join Him For Special Duets As He Opened For The Rolling Stones In Nashville On Wednesday (17jun15). 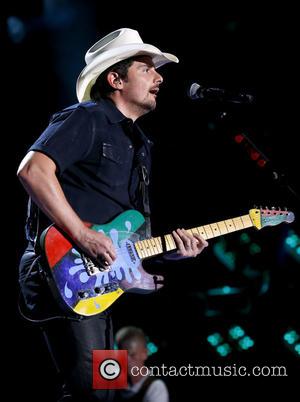 The rock icons brought their Zip Code tour to the Bridgestone Arena in Paisley's adopted hometown in Tennessee, and the Celebrity hitmaker shared the stage with a couple of his friends.

Eagles guitarist Walsh came out to sing his own solo hit Life's Been Good with Paisley, while Underwood performed the duo's chart-topping duet Remind Me.

Underwood shared a snap of herself and her good friend onstage on Instagram.com, and added the caption, "Had a blast tonight singing with Brad Paisley before the Rolling Stones! Yay!"

Paisley later joined the Rolling Stones for a rendition of their song Dead Flowers, which he previously played with the band during a gig in Philadelphia, Pennsylvania in 2013.