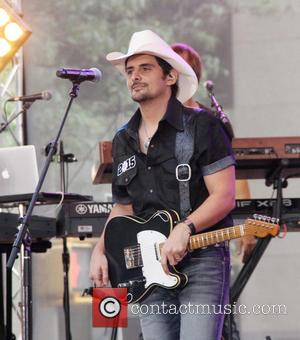 Like many fans, Paisley was stunned when the first couple of country music announced its divorce earlier this summer (15), but he's optimistic the break-up, which appears to have triggered a few more, will make for some great songs.

He tells U.S. news show Access Hollywood, "Blake and Miranda got a divorce in our format, which is a big deal because they're two of the biggest stars and that was such a bummer, and then Reba (MCEntire) gets a divorce, like, right away... Now it's like (an) outbreak.

"It is good for country music - that's better songwriting; there's nothing worse than, 'Oh, I love you and everything's great'. It's better like, 'You cheatin', lyin', no good...' Those are the songs that you wanna hear."

But it doesn't look like Paisley will be following the divorce trend anytime soon - he and his wife of 12 years, actress Kimberly Williams-Paisley, recently renewed their wedding vows.