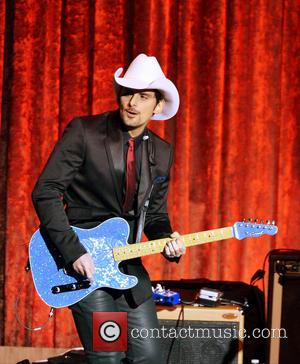 The singer/songwriter performed at his old pal's funeral in Nashville, Tennessee on Thursday (02May13) and has posted tweets about his grief ever since Jones' death on 26 April (13).

Now he has put pen to paper to write an essay about his friendship with Jones and what the old-timer, dubbed the Possum, meant to him.

Paisley writes, "I grew up a huge fan of George Jones. I was familiar with the legends, the hard-luck stories, the accounts of missed gigs and drunken riding-mower notoriety. I was mesmerized by his voice, like almost anyone with the ability to hear. So I was ecstatic when I got to open shows for him a few times in West Virginia, as a young performer."

The Celebrity singer recalls befriending Jones and his wife Nancy in Nashville, revealing, "I would go fish at their farm ponds on my days off. When I got my first horse, I was still living in a small condo in town... and George said, 'Son, keep him out here on the farm.' So I did. For free.

"I would be out there riding and look up, and here would come that golden voice in a golf cart. Often I would stay for dinner. He and Nancy were beyond generous to young crooners like me."

Paisley adds, "You would start to feel almost normal around him, watching football, eating dinner, telling jokes... and then I would go see him at the Grand Ole Opry or on the road and fans would start crying at the sight of him. He would burst into White Lightning and raise the roof."

The famous fan concludes, "Much will be written about the alcohol, the craziness or the wild side of the man. That's a War and Peace-sized book itself. But thankfully, the guy I knew and loved was who he became when he beat that... I will never forget him. And George, wherever you are, trust me when I say this: Country music will never forget you either. We miss you. And we love you."