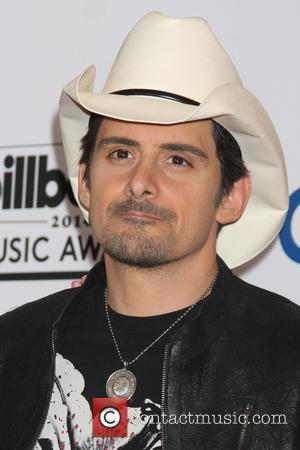 It's not clear what the 'Beat This Summer' hitmaker said to the Westboro group but they seemed happy enough to stand behind him smiling whilst he took the shot and a member of his entourage filmed the scene. "Westboro Baptist Selfie!!" he wrote as a caption, sharing the surreal snapshot. "Or west-Burro(ass) selfie. Hopefully they can hear the show out here."

Paisley is following in the footsteps of other music stars, particularly country artists, who are taking steps to confront the Westboro protesters when they appear at concerts. Last year, Vince Gill confronted a group of protestors who had come out to picket a concert he was playing in Kansas City.

More: Brad Paisley "honored" to perform for 3,000 troops in Afghanistan.

"[Jesus said] a lot of stuff about forgiveness, about grace. You guys don't have any of that," Gill reportedly told one of the church's supporters.

The church, which is described homophobic and anti-Semitic hate group" by the Anti-Defamation League, regularly courts controversy by protesting at the funerals of soldiers as well as celebrity concerts, including Lady Gaga and Lorde, and has plans to picket against an upcoming Sheryl Crow and Rascal Flatts show. Brad Paisley Decided To Pay The Westboro Protesters A Visit & Take A Selfie At The Scene.