Angelina Jolie lets Brad Pitt choose her red carpet clothes, and he is a particular fan of boatneck dresses on his partner. 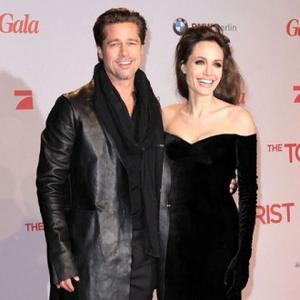 The 47-year-old actor - who raises six children with the 'Tourist' actress - stunned the brunette beauty's styling team when he selected a blue Max Azria gown for his partner to wear at the Screen Actors Guild awards in 2009.

Speaking about the fitting, Lubov Azria, chief creative officer of BCBGMaxAzriaGroup, recalled: "We were going to dress Angelina Jolie and we had a choice of three gowns with us. When we got there, she said she wanted Brad to pick.

"There's usually a staff of 10 people who all have an opinion. But Brad was very decisive. He's an architect and likes geometric things. He chose the dress that everyone thought was backwards, and it was. He likes boat necks - that's all she wears."

A boat neck - also known as a bateau neck - refers to a wide neckline that runs horizontally, front and back, almost to the shoulders.

While Brad takes a strong interest in Angelina's wardrobe, the 35-year-old actress has previously claimed she doesn't worry about being fashionable as long as she feels comfortable.

She said: "I don't think too much about what to wear on the red carpet. I usually have three basic colours and I get the same shapes in different colours!

"But I like to get dressed up and feel like a lady every once in a while."