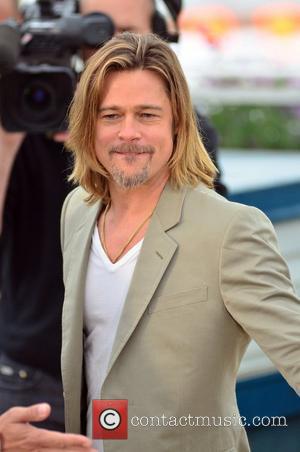 Brad Pitt's Chanel commercial has already come in for its fair share of criticism, though the guys on Saturday Night Live thought there was still plenty of room to stick in the boot this past weekend. Of course, the Hollywood star has become the first male to promote the classic women's fragrance though the ads are the biggest pile of nice smelling pretension ever to grace the small screen. Actually, on second thoughts, it's not even pretentious, it's just Brad Pitt saying words that don't make sense.

But anyway, the ads were parodied by Taran Killam in a two-part short on Saturday. In the original commercial, the 'Killing Them Softly' star utters the immortal lines, "It's not a journey. Every journey ends and we go on. The world turns and we turn with it. Plans disappear, dreams take over. But wherever I go, there you are. My luck, my fate, my fortune." Though, playing the actor in the SNL skit, Killam, 30, complained, "I'm sorry, is there really no script? 'Cause I've been talking to myself for, like, two hours straight and I'm starting to sound insane.You want me to sound less coherent? OK - I can just start making up words." In the closing moments, the comedian joked, "Is it me, or do I look super homeless? That's what you want? Rock 'n' roll! Chanel No. 5 - inunderstandable!"

Though we can probably rip the commercials for weeks (and probably will), it's Mr Pitt who's no doubt having the last laugh. His cheque from Chanel for $7 million has probably cleared while you've been reading this.