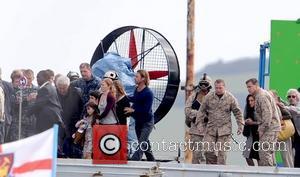 Picture: Brad Pitt filming scenes on location for 'World War Z', a film based on a Max Brooks novel about a global war against zombies. Pitt...

World War Z, the hugely anticipated apocalyptic movie starring Brad Pitt, moved filming to the streets of Glasgow this week, but there are already rumblings of concern regarding the 'reworked' plot, reports Screen Rant.
The movie adaptation appears to be vastly different from MAX BROOKS' original novel about a U.N employee who begins to interview the survivors of a 'zombie war'. A recent press release from Paramount Pictures contained a synopsis that suggests the film will be a radical departure from Brooks' work. It reads, "The story revolves around United Nations employee Gerry Lane, who traverses the world in a race against time to stop the Zombie pandemic that is toppling armies and governments and threatening to decimate humanity itself". The tweaking of the plot suggests the film will follow a conventional method used in thrillers movies, rather than the documentary feel conveyed in the book. Nevertheless, World War Z looks set to be one of the most hyped releases of the year before it hits screens on 21st December 2012.
The film, which has already shot scenes in Cornwall, England, also stars MIREILLE ENOS and Bryan Cranston. Max Brooks' book 'World War Z: An Oral History of the Zombie War', partly inspired by the horror movies of GEORGE A. ROMERO, won numerous awards following its release in 2006.