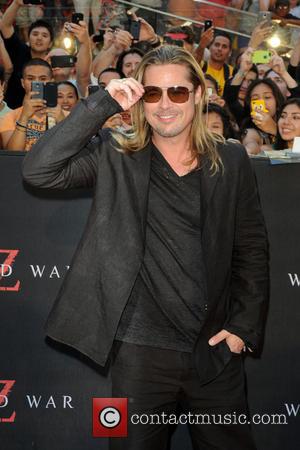 Well we've pretty much seen it all in the saturated zombie film industry. Yet another film where the overcrowding and congestion in big cities and scarcity of essential resources is exploited by filmmakers to create themes of panic, frenzy and loss of basic human morality.

For Pitt plays the hero Gerry Lane - a former military officer man tasked with saving the planet from hoardes of undead who have been infected with a mysterious virus that is transmitted through biting. And so ensues a round-the-world trip from Philidelphia to Korea to Jerusalem to er...Cardiff. Doctor Who-style budget scrimping, anyone?

He and his family, including his wife (Mireille Enos), flee their quiet suburban life at the first signs of the rabid breakout, ending up on an aircraft carrier as Lane's crisis capabilities are called into action.

Our own Rich Cline puts a positive spin on the hardly original premise describing it as a "fiercely paced apocalyptic adventure" and, praising its "clever Contagion-style investigative thriller" onset, yet laments the illogical plot holes and lack of flesh on any character but Pitt's (quite so).

The Guardian's Peter Bradshaw too enjoys the chaotic "energy to the opening sequence" but scorns that "the real panic spreads in the cinema auditorium as we realise we've got two hours of dodgy acting and dull CGI work ahead."

However, it's not all zombie-style death groans, after garnering a nice plump 67% on its first day of release on Rotten Tomatoes, LA Times' Kenneth Turan thinks the film is done "with intelligence and skill", lauding Pitt's charisma and praising the "effective and remarkably plausible" scenes of "pandemonium and societal collapse," despite the formulaic concept.

The Wall Street Journal enjoys the movie "as a powerful vision of planetary chaos" but has doubts whether the premise could have any longevity turned into a trilogy franchise. Pitt is yet again praised as "the movie's greatest asset" and the skilfully created tension as he and wounded Israeli soldier (Daniella Kertesz) partner up to evade the zombie masses is noted.

It's been a long time coming for the Marc Forster (Quantum of Solace, The Kite Runner) directed movie: after the film rights were bought in 2007 to Max Brooks' novel of the same name, it was four years until filming began and due to extra time being needed for shooting, the December 2012 release date was pushed back until today (21st June).

Yes it's clichéd, yes it's rather "One man. Stands on his own. Against the world" but it's Pitt doing what he does best - looking good whilst saving the world, and the film, from a swarm of angry, dehumanised flesh-eaters who'd like nothing better than to tear Pitt apart - be it with their teeth or in 500 words.

Just seems like what World War Z lacks most is braaaaaaains.