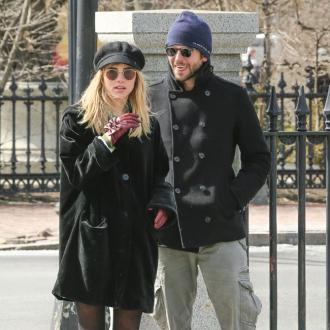 Bradley Cooper is besotted with his new girlfriend Suki Waterhouse.

The 'Silver Linings Playbook' star has flown to Paris with the 20-year-old British model for a romantic break just weeks after whisking her to visit him in Boston, where he was busy filming his new movie last month.

A source close to the 38-year-old actor told RadarOnline.com: ''Suki has Bradley marching to the beat of her drum.

''First, she clicked her fingers and he invited her to Boston, even when he was busy filming his latest movie.

''Then, she told him she wanted to be romanced in Paris. He immediately organised it, with no expense spared.

''Suki is keeping Bradley on his toes because she doesn't want him to treat her like one of his flings - she wants far more than that.

''She's ambitious and has a successful modelling career in the UK, which she is desperate to replicate in the States.

''And she also appeared in her first movie called 'Pusher' last year, so she would love Bradley to introduce her to some producers and directors to expand her acting career.

''She wants to make sure that this relationship works.''

The actor - who split from Zoe Saldana for the second time last year - met the blonde model, who is 18 years his junior, at the ELLE Style Awards in London in February.

Bradley previously admitted he was on the lookout for a new girlfriend, who was a ''free spirit'' that could make his heart race.