Bradley Cooper is still madly in love with Suki Waterhouse and the couple are ''very much'' together despite rumours they recently split. 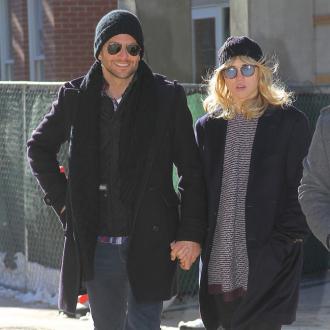 Bradley Cooper is still madly in love with Suki Waterhouse.

The 'American Hustle' star recently sparked rumours that he had split from the British model after more than a year of dating, amid reports he had reconnected with his ex-girlfriend Renee Zellweger, but friends close to the couple insist they are still very happy together.

A source told E! News: ''Bradley and Suki are very much a couple.''

The duo haven't been seen together since attending a post Oscars bash in Los Angeles in early March, but the blonde beauty, 22, was spotted arriving at LAX airport over the weekend to spend a few days with the 39-year-old star.

It was previously revealed that Suki was ''amazed'' by Bradley's level of intelligence when she first met him in London in February 2013.

A source said: ''She was ready to write him off as another hunky dumb actor, but Bradley really surprised her with his fluency in French and the intense pile of reading material he has beside his bed.

''He also always carries a backpack of very intellectual books with him to stave off boredom.''

Another friend suggested the aspiring actress hopes to walk down the aisle with 'The Hangover' actor - who married actress Jennifer Esposito in 2006 before divorcing her in 2007 - in the near future.

The source explained: ''There's a big age difference between them, but Suki adores Brad and after winning over his mum's heart she's hoping for a ring on her finger.

''He's so different from the men she usually meets in the modelling world. Suki loves that Brad's smart as well as sexy. He can't do anything wrong in her eyes.''