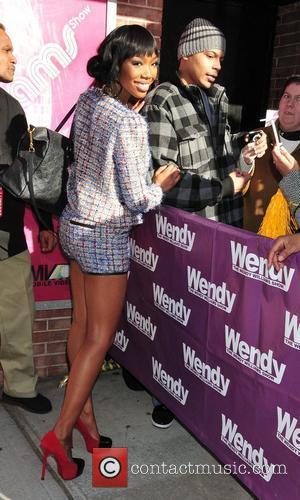 Singer Brandy spent her 33rd birthday in tears after the death of her friend and idol Whitney Houston, who played her fairy godmother in Cinderella.
Brandy broke down in tears on Saturday (11Feb12) after she heard the tragic news just hours before she was due to meet up with Houston at Clive Davis' pre-Grammy Awards party.
She attended the bash on her birthday but was too upset to hit the stage for a performance the I Will Always Love You singer had reportedly helped to co-ordinate. She later told Us Weekly magazine she was in a "bad space" and couldn't sing.
Now Brandy has released a statement paying tribute to her longtime inspiration.
She writes, "My heart is destroyed. I lost my idol and dear friend. My prayers go out to Whitney's family and her millions of fans around the world. Whitney - the greatest voice of all time - you are my angel and I will always and forever love you."
The pair became close after shooting the 1997 musical movie Cinderella, in which Houston played Brandy's magical mentor.
Houston had also been romantically linked to Brandy's little brother Ray J at the time of her death, although neither the late star nor the R&B singer had confirmed reports they were dating.
Reports suggest the I Will Always Love You singer will be laid to rest in her native New Jersey on Friday (17Feb12).