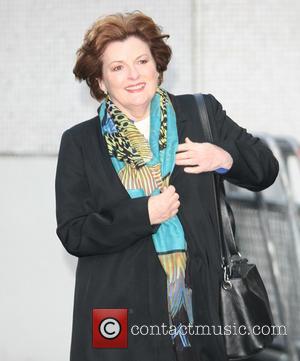 Veteran British actress Brenda Blethyn has revealed the real reason she wed after an engagement lasting 35 years - it makes the paperwork less complicated when she or her husband dies.

The Oscar-nominated star, 67, spent decades in a relationship with art director Michael Mayhew before they finally decided to tie the knot at a lowkey ceremony in London in 2010.

She later insisted the decision to wed after so long was sparked because "it just seemed the time was right", but now she has admitted it is too "awkward" to sort out an unmarried couple's financial affairs when one of them passes away.

The Secrets & Lies star tells the August issue of Reader's Digest, "You get to a certain age and some of your friends start popping off and you think, 'Well wouldn't it be awkward, legally, if I went or you went and we'd never married?' So, really, we didn't marry for romantic reasons and yet it did turn out romantic in the end because I discovered that I love being Michael's 'lawful wedded wife'. I love the sense of belonging."

Blethyn was previously wed to Alan Blethyn in 1964, but their marriage ended in 1973.

This Bobby Darin biopic reportedly spent about 20 years going through various drafts by...