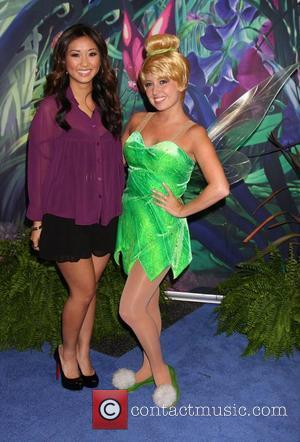 Brenda Song, the Disney star best known for her role on 'The Suite Life of Zack and Cody', is pregnant with her first child. The father is reportedly Miley Cyrus' brother Trace Cyrus, according to E! Online.
The couple, who recently modelled together for Trace's Southern Made Hollywood Paid clothing line, first stepped out together at a Nylon party in May 2010. No official announcement has been made and the couple, who have dated for over a year, are notorious for keeping their relationship safely under wraps. Despite both stars receiving a wave of messages on their Twitter pages, neither mentioned the pregnancy in their latest tweets. Brenda thanked followers for making her name a "trending topic", while Trace told fans, "Getting that time for sleep. 3:30 Am in Los Angeles. Trying to get on a normal sleeping schedule. I will see you tomorrow twitter. Goodnight". As well as her appearance on 'The Suite Life', 23-year-old Song has starred in a number of Disney movies, most notably 'Get a Clue' and 'Stuck in the Suburbs' in 2004. Trace is best known for fronting the American rock band Metro Station.
Brenda recently completed work on the forthcoming dance movie 'Boogie Town' - billed as a modern day West Side Story for the "hip hop generation".