Review of Other People's Problems Album by Breton

Breton are a South London art collective. If each of those last few words sent a small shudder through your spine, then, oddly enough, you'll probably quite enjoy Other People's Problems which sounds absolutely nothing like one might expect an album recorded by a group of multimedia artists living in a squat to sound. It's a polished, immediate record free of any hint of pretension. The music won't shock you, unless you find the idea of mixing sounds associated with indie music and dance music shocking (and if you do, I hope you're enjoying 1997). It isn't especially artsy or 'difficult'. It's quite a lot of fun though. 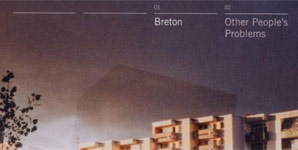 You might already be familiar with 'Edward The Confessor'; a prickly ball of attitude with a striking video. It's an unusual display of outright aggression on an album which generally eschews confrontation, although, there are hints of restrained anger on the excellent and rather intriguing 'Governing Correctly' which somehow manages to make the lines 'Like it was more written down as a narrative/That was absorbed and put down as an adjective' infectiously catchy - okay, perhaps there is one hint of pretension after all. Insofar as the group have a formula, it involves layering woozy synths, squelching bass and urgent guitars over crisp beats. The effect is generally sleek and polished, with one caveat: the whiny sung-spoken vocals appear to have wandered in from a different album altogether. For my money, they give what would otherwise be an overly glossy record a pleasantly ragged, fraying edge but the idea of a Yannis-from-Foals sound-alike striking poses throughout the album will not appeal to everyone.

The carefully plotted tracks are sometimes allowed to stretch out and breathe and there are occasional passages of head-nodding atmospherics, when the synths meander slowly through the spaces between the beats. Closing track 'The Commission' executes this perfectly, and when the distant, lovelorn vocals drift across the track, the effect is not a million miles from what Burial achieved on Untrue. Such moments are relatively infrequent, however: for the most part, this is a bright and busy record.

Other People's Problems gets a lot right. There are some ill-advised moments ('Ghost Note' is an ugly attempt to replicate 'Edward The Confessor''s bravado), and it would have nice if the group had included excellent early track 'The Well' on the record. Otherwise, it's a consistently catchy album with some neat melodies and hypnotic chanted choruses.