Quote: "You pick yourself up, dust yourself down and just keep going. You live on, and you have a wonderful memory of them always with you, but you're not going to stop doing what you do. Otherwise, you die inside, you know? And we would die. If I didn't do what I was doing there'd be nothing. I'd just be another guy looking for a hobby." AC DC star Brian Johnson insists the group never considered splitting up when co-founder and bassist Malcolm Young quit last year (14) as his dementia worsened.

Fact: AC DC star Brian Johnson helped Billy Joel ring in 2015 on Wednesday night (31Dec14) when he took to the stage with the Piano Man at his gig in Florida to perform a rendition of his band's You Shook Me All Night Long.

Quote: "I didn't know they were going to do that because Malcolm is a very proud man. It is a debilitating disease, it's f**king horrible and I hate it! But I don't want to say much more than that because Malcolm is a very private guy." AC DC star Brian Johnson was blindsided by the decision to announce news of his bandmate Malcolm Young's hiatus from the group due to illness.

Fact: Car-mad rocker Brian Johnson has signed up to co-drive in the upcoming Rolex 24 race at Daytona International Speedway in Florida. The AC DC frontman is planning to drive a Riley prototype car for Predator Performance in the endurance race early next year (Jan12).

Fact: AC DC frontman Brian Johnson is the proud owner of the jersey soccer star John MCGovern wore when he lifted the European Cup for Nottingham Forest in 1980 and the helmet racing driver Jacques Villeneuve wore when he won Formula 1's world championship. The two sports stars are fans and friends of the rocker. 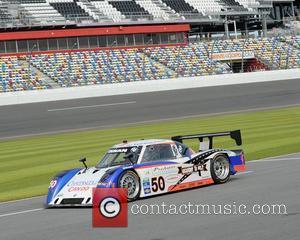