Brian McFadden was quizzed by Australian police after reportedly becoming abusive on a Virgin flight from Los Angeles to Sydney. 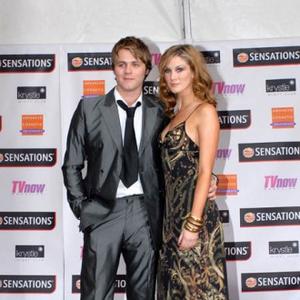 Brian McFadden was quizzed by Australian police after reportedly becoming abusive on a flight from Los Angeles to Sydney.

The former Westlife star - who is engaged to Australian singer-and-actress Delta Goodrem - was reportedly drinking heavily and smoking on the Journey and verbally abused flight attendants and fellow passengers on the Virgin plane.

After landing, Brian - who was travelling with his fellow 'Australia's Got Talent' judge Kyle Sandilands - was asked by reporters if he'd been smoking on the plane and answered he "did not smoke" while holding a cigarette in his mouth.

Australian Federal Police confirmed that officers had received a request from Virgin to meet the inbound flight when it landed and revealed they interviewed two men although no charges have been brought against anyone.

However, 'Australia's Got Talent' star Brian has played down the incident, saying: "I had a couple of drinks on the plane, I'm not going to lie about that. But I definitely wasn't causing a scene or causing any problems for anybody.

"I 100 per cent did not smoke. (I didn't joke about smoking). If I was gonna smoke on the plane, I would hardly go around telling people I'm gonna. It takes a lot more than a couple of drinks to get me drunk, I'm an Irishman."

He also tweeted: "Wasn't arrested! Didn't smoke on the flight. And the Virgin staff were very nice. I did have a few drinks but I was not smashed and abusive.

"If reports were true then I would have been arrested, fined and wosrt! Banned from my favourite airline V Australia. Storm in a tea cup. (sic)"

His friend Kyle added: "He wasn't drunk, he wasn't intoxicated. There was no drama at all. If 20 seconds with federal police is being interviewed and detained ..."