Britney Spears' fiancee Jason Trawick made a gushing video to tell the singer how proud he is of her US 'x factor' debut in Austin, Texas, last week. 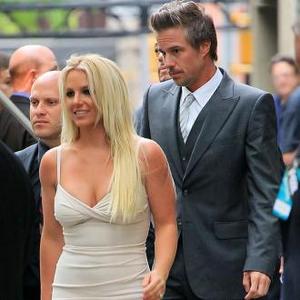 Britney Spears' fiancee Jason Trawick made a romantic video to tell her how proud he is of her US 'x factor' debut.

Despite missing performances by four contestants while she had a break during her first day of auditions in Austin, Texas, last week, Jason, 40, revealed his pride in the star's performance.

In a video posted on his Viddy.com account, which shows him lying on the bed in their hotel room, he said: ''Princess, we just completed our first weekend in Austin [Texas] on 'X Factor'. Just wanted to say I'm very proud of you and I love you so much. Congratulations.''

He added he wanted Britney to hurry back to their bed before signing off by directing a kiss in the direction of the lens.

Britney responded to the video with a posting which read ''awww love you too xoxo (sic)'' on her Facebook page.

The 40-year-old talent agent - who proposed to 30-year-old Britney in December - used to be her manager but was pronounced her co-conservator in April along with Britney's father Jamie who has been in control since her public meltdown in 2008.

Show supremo Simon Cowell scoffed at claims Britney left the auditions without consent last week, and insisted she simply went to have a break which is allowed on the series.

Speaking to the official 'X Factor' USA website, he said: ''There was no walking off. We have breaks every five or six songs. You can go have a cigarette, you can go to the loo.

''So as soon as anyone left their chairs, it was reported ... that someone had left the show - and they hadn't!''

Britney has joined the panel of the pop star search show along with Demi Lovato with the pair taking over from departed judges Nicole Scherzinger and Paula Abdul.