Britney Spears Against Me! Entertainment Weekly

Britney Spears' long-awaited new single 'Hold It Against Me' will receive its first plays on US radio next week. 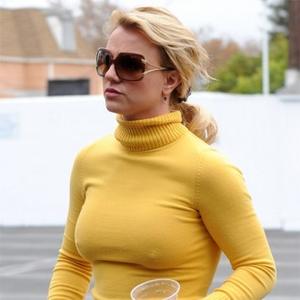 Britney Spears will premiere her new music next week.

The 29-year-old star's latest track, 'Hold It Against Me' will debut on radio in the coming days prior to release in the US on January 7 and insiders who have heard the song - her first release since '3' in September 2009 - think fans won't be disappointed.

Sharon Dastur, programme director for New York's Z100 radio, told Entertainment Weekly magazine: "It's produced by Dr. Luke and Max Martin. And the beat that they give her is really unique compared to other artists - this infectious bass beat beneath the song. Plus, the hook is just amazing. It will be out on January 7."

Rumoured lyrics to the track appeared online earlier this week, but producer Dr. Luke insisted they were not genuine.

Britney's single is released ahead of her as-yet untitled album, which is due for release in March.

Among those the singer worked with on the record was Swedish producer Shellback, who recently spoke out to praise her professionalism.

He said: "Britney's actually damn professional. You read a lot on the Internet that Britney is not singing and mimes, but she is actually damn professional. She's done it since she was 16. And just rhythmic way, she is f***ing awesome! And you do not have to go through and talk about the rhythms and stuff that you sometimes have to do. She's very easy in the studio."