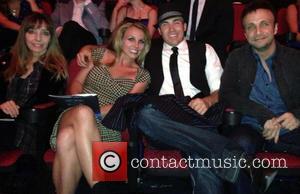 The former Mickey Mouse Club star, who became a national treasure in America thanks to a string of 1960s cult beach movies, died from complications due to her longtime battle with multiple sclerosis, and tributes have started to pour in for the screen icon.

Spears, another former Disney darling, reveals news of Funicello's passing has hit her hard, writing on Twitter.com, "I am Devastated to hear about the passing of Annette Funicello. She was a role model for me during my days as a Mouseketeer. Heartbroken".

Singer Abdul is also shocked by the loss, tweeting, "I'm truly saddened by Annette Funicello's passing. She was an original Mouseketeer and an original talent all-around", and former 'N Sync star Lance Bass quotes the lyrics for The Mickey Mouse Club March, adding, "'Now it's time... to say goodbye' to Annette Funicello - my favorite Mouseketeer (After (former bandmates) Jc (Chasez) and Justin (Timberlake) of course) Trading in the ears for a halo. You will be missed!"

Actress Mia Farrow and Shatner have also paid their respects to the star, while burlesque beauty Dita Von Teese writes, "Aw, sad to hear of Annette Funicello's passing, another raven haired goddess of the 50s that inspired me".

Singer Nancy Sinatra has also remembered her late pal by sharing an old photo of the pair, writing, "Annette my buddy and me with two of our friends. I'll miss you forever, Annie, and I wish you godspeed."