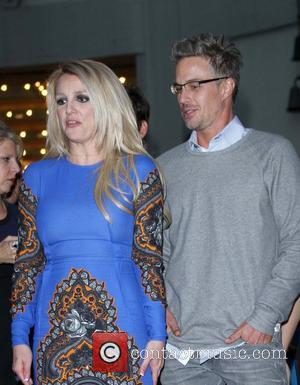 Britney Spears was forced to dish out some home truths to an old singing partner and Demi Lovato was reduced to tears on last night's episode of X Factor. Don Philip, 32, sang a duet with Britney Spears, entitled 'I Will Still Love You,' on her debut album, Baby One More Time, in 1999. As the years have passed him by, so has the opportunity to launch a serious professional singing career. Entering X Factor and auditioning in front of his one-time co-singer was evidently a big deal for him, as he uttered "I hope she likes me. I hope she likes me" before taking to the stage.

Sadly for Don, though no doubt the X Factor execs were rubbing their hands with glee at the awkwardness of it all, his performance of Beyonce's 'Halo' was simply not up to scratch. MTV News described his vocals as "herky-jerky, thin and nasally and, well, not that good." Britney clearly found the situation tricky to navigate but retained her integrity and was able to deliver the bad news to Don without upsetting him, or betraying her true feelings. "I feel like through the years maybe you've gone through a lot of hardships and battles ... but your voice really isn't up to the bar of the standards of the 'X Factor' and what we want."

Meanwhile, Demi Lovato came face to face with a super-fan, who 'just happened' to have the words 'stay strong' tattooed on her. just like Demi does. Although she seemed suspicious of 19 year old Jillian Jensen at first, Demi's heart soon melted, as Jillian told her tale of being the victim of bullies. Before long, she was singing 'Who You Are' by Jessie J and Demi had a solitary tear rolling down her cheek. Exactly the kind of TV moments that X Factor bosses are looking for! And this is just the start of the Britney Spears X Factor journey.