The former 'The Hills' star reiterates that attending the NFL star's wedding "was not me trying to diss her [Kim] and Kanye." 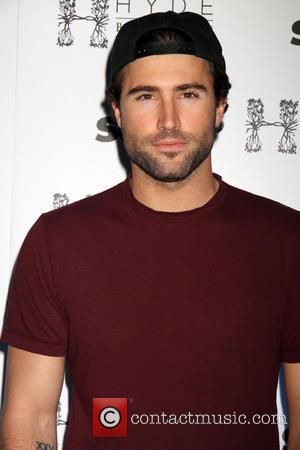 The former 'The Hills' star and his girlfriend Kaitlynn Carter's appearance at the nuptials have caused many people to think that he is trying to diss his step-sister Kim Kardashian.

The 33 year-old reality star used to date Bush, and on top of this, Brody famously missed hers and Kanye West's Italian wedding back in May.

However, apparently everything is all good in the famous family's household.

"Not going to Kim's wedding was not me trying to diss her and Kanye," Jenner told People Magazine, while attending the 9th Annual All-Star Celebrity Kick-Off Party on Monday night (July 14th).

The 30 year-old explained that work commitments were the cause of him missing Kim's big day.

"I simply had a very last-minute thing," he said. "They didn't want to let people know about their wedding early in advance, and I had already booked gigs in Chicago and some other places, so I was already working."

But as for Bush's wedding, which took place this past weekend, Brody commented, "I've been friends with Reggie for a very long time. I really love him and he's one of my favorite people on this entire planet. I got to have a really close relationship with him through him and Kim being together."

The lady's man added, "The only opinion that matters in this situation is Kim's, and me and her are good, she is incredible."

Brody first addressed the rumours speculating on why he missed Kimye's wedding at the start of the month when speaking on 'The Brody Jenner & Dr Mike Dow' podcast.

''Realistically, I had work commitments and it was a long way away," he said. "We talked about it! It was very simple. After I got the invite, I said, 'Unfortunately, I won't be able to attend but I wish you the best. I love you.'"

More: It’s Alright To Leave The House! Kim Kardashian Was Only Joking With Pregnancy Style Advice

Brody missed Kim and Kanye's wedding in May