Bruce Springsteen: 'I Thought Sir Paul Had A Right To Break Curfews' 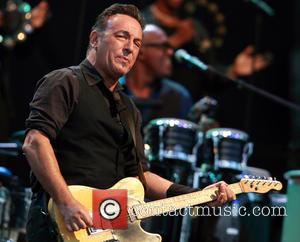 Bruce Springsteen was amazed when concert bosses pulled the plug on his performance with Sir Paul McCartney last year (12) as he assumed the Beatles star's knighthood gave him the right to overrun a curfew.

The Boss teamed up with the Yesterday hitmaker at London's Hard Rock Calling event last July (12) to sing Fab Four hits Twist and Shout and I Saw Her Standing There at the close of his open-air gig in Hyde Park.

Fans were left dumbstruck when organisers pulled the plug while the veteran stars were still performing as they had overrun the show's cut-off time, and Springsteen has now confessed he thought MCCartney's status as a living legend gave him special privileges.

He tells the London Evening Standard, "I wasn't aware the plug had been pulled and people couldn't hear what I was singing. Afterwards I said to Paul, 'I can understand them pulling the plug on me, but you? Aren't you a knight?'"