Eric Church Gets Bruce Springsteen Approval From The Boss Himself 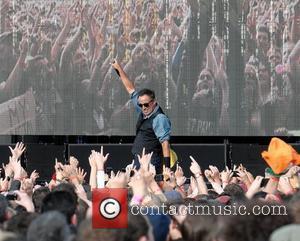 Bruce Springsteen has officially approved a song country star Eric Church named in his honour by sending the singer a special keepsake to congratulate him on the hit.
Church topped the U.S. Country chart earlier this year (12) with the track Springsteen, which makes numerous references to The Boss, but it was only on Sunday (19Aug12) that he received a real thumbs up from the rock legend himself.
He reveals Springsteen had his assistant and road manager Wayne LeBeaux hand-deliver a personal note to him at his recent concert in New Hampshire and he was left stunned by the kind gesture.
He tells Billboard.com, "(LeBeaux) came on the (tour) bus and was telling me this story. As they were leaving the Fenway show (in Boston, Massachusetts), (Springsteen) said, 'Wayne, what are you doing this weekend?' 'I'm going to see Eric Church.' "No kidding,' and (Springsteen) took out a set list and wrote me a great note, filled up the whole back of the set list talking about how he was a fan of the song, how his family was a fan of the song. He signed it and said, 'I hope we cross paths somewhere' and told (LeBeaux), 'Make sure you deliver this to Eric.'
"It's a pretty incredible note. It's the first time I've officially heard from him. I had heard he was a fan of the song, but it's the first time I officially heard. It means the world to me - and the set list is three hour and 37 minutes. That impressed me, too."
Church has since stored the treasured note away and keeps it "locked up" in a safe place.