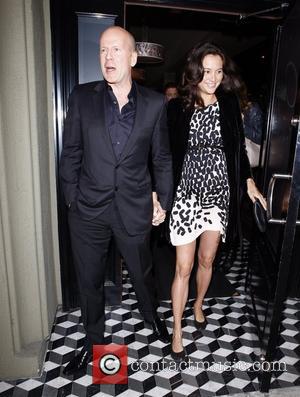 Bruce Willis has become a father again for the fourth time! The renowned action actor and former husband of Demi Moore is celebrating after having his first child with current wife Emma Heming. All of Willis' previous children came from his marriage to Moore, with Rumer, Scout and Tallulah now 23, 20 and 18 respectively. The pair were divorced in 2000 after 13 years of marriage; giving no reason for their break-up they've nevertheless stayed close friends and proved good parents for their kids.
Now though Willis has a new chapter to begin in his life, reports the UK's Daily Mirror, after Hemming gave birth to 9lbs 1 oz girl Mabel Ray Willis at the weekend in Los Angeles. A spokesperson for the couple said "They are overjoyed about the newest member of their family. Both mother and baby are healthy and doing beautifully." Willis and Heming were married in 2009, his second marriage though he'd been engaged to Brooke Burns in 2004.
Whether Bruce has the time to be around much as a father could be a source of worry however; he has a busy schedule ahead of him after a mini-revival of sorts and will be appearing in sequels 'G.I Joe: Retaliation' and 'The Expendables 2.' However Bruce has rarely been castigated as a bad dad and Heming should feel in safe hands.