Bruno Mars has revealed soul singer James Brown ''changed his life'' by inspiring him to work hard at singing and stay in school as a child. 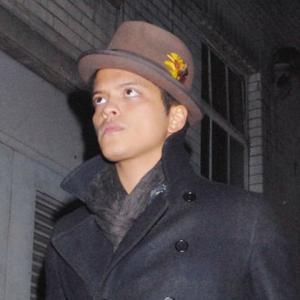 The 'Grenade' hitmaker revealed he would watch old recordings of the 'I Feel Good' singer - known as The Godfather of Soul - which inspired him to work hard in both his music career and his education.

He said: "I'd watch James Brown on an old concert from 1964, 'The T.A.M.I Show'. Seeing him changed my life. I was working every night singing and going to school during the day. It was very important to me to graduate."

Although he has now found success as a songwriter - co writing Cee Lo Green's smash 'F**k You!' - and performer, picking up the Best Male Pop Vocal Performance Grammy for his single 'Just The Way You Are', Bruno, 25, says fame hasn't been easy and he sometimes finds it "lonely".

He said: "I feel great. I've worked really hard. I hope people realise all the success I've had didn't just happen in a day. It's years of locking yourself away in the studio.

"It can get a little lonely and dark sometimes, but the pay-off is when you get the album out and your songs are playing all round the world."