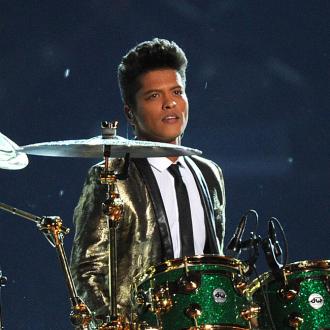 The 31-year-old musician has admitted he found it ''daunting'' working on a new album and has hinted he felt pressure to come up with more hits following the success of the 2014 track, which Bruno claims was ''the biggest song'' he has worked one.

Speaking on '60 Minutes', the Hawaii-born star said: ''This album, it was daunting, because coming off of 'Uptown Funk' was like the biggest song I've ever been a part of. And then you're like, alright, now what are you gonna do?''

And the 'Just The Way You Are' hitmaker has revealed he wants people to see ''palm trees and magical islands'' when they listen to his music.

Speaking about the inspiration behind his songs, he said: ''I just really care about what people see. I want them to know that I'm working hard for this. These are my people, and this is my culture, and I want to represent them. I want people to think of Hawaii and think of palm trees and magical islands and Bruno Mars.''

Meanwhile, Mars has admitted he can tell when something will be successful by the reaction, and the star thinks if the audience aren't ''freaking out'' after hearing ones music it's not good enough.

He said: ''And if you wasn't hitting those notes and the audience wasn't freaking out, then you weren't doing it right.''