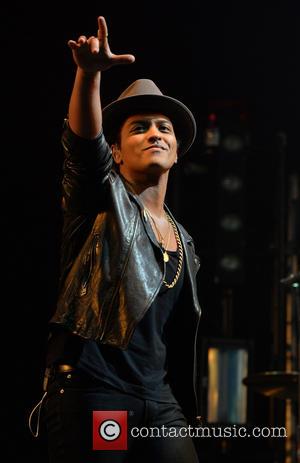 Several high profile stars have come forward to offer their support to the stricken Bruno Mars, after the pop star lost his mother Bernadette on Saturday (June 1, 2013). The 55 year-old, whom Bruno wrote a song called I Love You Mom about, had an unexpected brain aneurysm over the weekend, killing her.

According to Hello! Magazine, tweets of support have come in from Mars’ family as well as stars like Rihanna and Randy Jackson. Rihanna posted, "Sending my love and condolences to @BrunoMars at this difficult time! I'm sincerely praying for you bro! #1Love," while Randy Jackson tweeted "terrible news. Praying for you @brunomars."As well as those, Mars’ sisters Presley Hernandez and Jaime Kailani also took to Twitter to pay tribute to their mother. "Mom, could you be the most beautiful girl in the world? Duh! Of course! I love you! ❤" tweeted Jaime. Her sister Presley, meanwhile, uploaded a photo of their mother in a hula bikini outfit, with the caption, "The most beautiful girl in the world. Until forever. I love you ma."

Mars has also received a huge outpouring of support from his fans, with tweeters showing their support in wake of Bernadette's hospitalization, by using the hashtags #PrayforBernie and #StayStrongMamaMars. Mars lyrics in I Love You Mom included the line "My mommy helps me with my voice, because a superstar singer is my first choice," indicating the influence she had on him. Rihanna has been among Mars' supporters since the death Mars owed a huge debt of influence to his mother