Red Hot Chili Peppers have defended their decision not to plug in their instruments at the Super Bowl on Sunday (02.02.14), 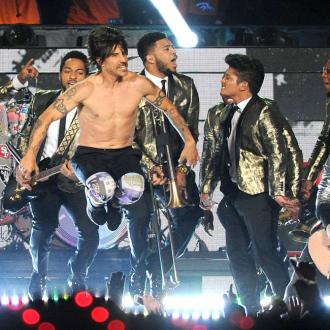 Red Hot Chili Peppers have defended their decision not to plug in their instruments at the Super Bowl.

The band - who were joined Bruno Mars for a rendition of 'Give It Away' during the American football game on Sunday (02.02.14) - sang live but pre-recorded the rest of their set.

In a statement, bassist Flea said: ''When we were asked by the NFL and Bruno to play our song 'Give It Away' at the Super Bowl, it was made clear to us that the vocals would be live, but the bass, drums and guitar would be pre-recorded.

''I understand the NFL's stance on this, given they only have a few minutes to set up the stage, there a zillion things that could go wrong and ruin the sound for the folks watching in the stadium and the TV viewers. There was not any room for argument on this, the NFL does not want to risk their show being botched by bad sound, period. (sic)''

Flea and guitarist Josh Klinghoffer were seen strumming on their electric instruments but neither were plugged in.

They joined singer Anthony Keidis and drummer Chad Smith on stage, while eagle-eyed musicians took to Twitter to tell fans they were not playing live.

Blues artist Joe Bonamassa tweeted: 'Flea ... I mean we all know, but for god's sake at least try to humor the children.'

Meanwhile, Living Colour guitarist Vernon Reid posted: ''That guitar is plugged into NOTHING.''