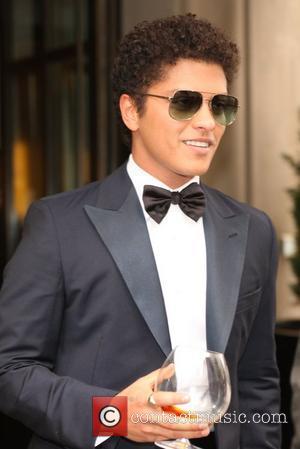 Bruno Mars celebrates his 27th birthday today, and the Do-Wops & Hooligans star looks like he's going to have quite the year ahead of him has he readies for the release of his second album Unorthodox Jukebox in December. Before that, his new single Locked Out Of Heaven has been getting played on the radio, and it's something that - even after millions of sales - the artist hasn't grown tired of. He tweeted on Saturday (October 6th) "Locked out of heaven is on the radio!!! This feeling never gets old. So thankful. Thank you Thank you Thank you."

No word on how Mr Mars is celebrating his birthday as yet, indeed it may be unlikely he'll get much of a chance given the hectic promotional schedule he'll be getting involved with over the coming weeks. There are high hopes from his record label Elektra that he'll be giving them another smash hit after his debut LP went in at the third spot on the Billboard charts in 2010, going on to sell six million records worldwide.

It's going to be a tall order, but the omens are looking good with some of the Twitter feedback Mars has received for his new song looking positive. We're pretty sure that even if he doesn't have time to celebrate today, there's going to be plenty of revelry to be had in the coming months.