Bruno Mars has officially invited the Red Hot Chili Peppers to join him for next month's half-time show at the 48th annual Super Bowl in New Jersey. 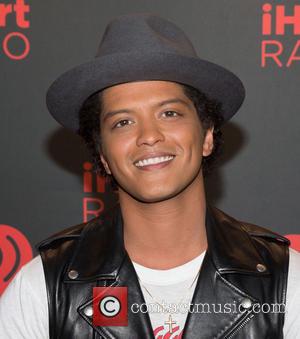 The Super Bowl halftime show next month will not only feature Bruno Mars, but the Red Hot Chili Peppers will be joining the stage as well.

In one of the most watched televised events of the year, the 28 year-olds performance will not be a one man show.

The rock 'n' roll hall of famers will be carrying some of the huge pressure that comes with playing live in the coveted halftime show, The Los Angeles Times reports.

Mars officially invited the Chili Peppers during a segment on Fox's broadcast of the NFC Divisional Playoff game between the New Orleans Saints and Seattle Seahawks on Saturday (Jan 11th).

The new collaboration will garner a larger amount of viewers as the two music acts are from different genres, thus covering a wider range of fans.

The RHCP are currently touring North America and were scheduled to play at a pre-Super Bowl party in Brooklyn on February 1st, hosted by sports radio station WFAN-AM, so they will already be in the tri-state area.

The 'Grenade' singer was confirmed as the halftime show act this past September (2013), where he was present for NFL's announcement on 'Fox NFL Sunday', alongside Fox co-host Terry Bradshaw and football analyst Michael Strahan at Times Square.

Bruno has also just been crowned with Billboards 2013 'Artist of the Year', beating the likes of Miley Cyrus, Taylor Swift, Justin Timberlake and Rihanna, thanks to the success of his latest studio album 'Unothodox Jukebox' which remained in the Hot 200 chart for almost a year.

The Chili's and Mars will have to put on an amazing show to top last year's unforgettable performance by Beyoncé.

The multi-award winning singer performed hit singles such as 'Halo' and 'Crazy in Love' whilst dancing all around the stage and giving fans the rare treat of a 'Destiny's Child' reunion, which was viewed by more than 110.5 million people in the U.S, according to FOX8.