Actor Bryan Cranston Has Warned Mel Gibson He Risked Blacklisting Himself As An Actor With His Highly-public Scandals. 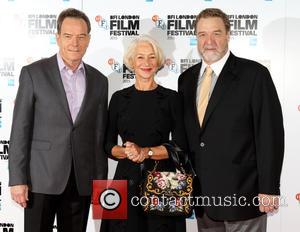 The Breaking Bad star plays Dalton Trumbo in new movie Trumbo, a look at the screenwriter who was 'banned' by Hollywood bosses because of his communist beliefs.

Bryan fears certain actors have the ability to make projects fall apart if they bring negative associations with them, and he cites the famously controversial behaviour of Lethal Weapon star Mel.

In 2006, Mel was arrested for driving under the influence and embarked on an expletive-filled anti-Semitic rant at a police officer, and in 2010 he was recorded using a racist insult during a phone conversation with his then partner Oksana Grigorieva.

He was later banned from going near her or her daughter due to a domestic violence-related restraining order, but an investigation was dropped when Mel pleaded no contest to a misdemeanour battery charge.

Since then he has enjoyed several movie roles, but Bryan fears Mel almost caused irreparable damage to his own career with the scandals.

"I think there is self-imposed blacklisting in Hollywood," he said during a press conference at the London Film Festival. "Take Mel Gibson... Any misbehaviour in a certain way, it depends on the sensitivity of the behaviour.

"If you have skeletons coming out of your closet that expose yourself to abnormal or criminal behaviour, then yeah, you put yourself on that blacklist. Because people won't work with you."

Bryan also referenced a time he had experienced the self-imposed blacklist, recalling a project he was promised in his early days as an actor.

"There was a time when I was told that I was up for a movie, many years ago," he said. "And I was very excited about it because it was a job, and they said: 'I think they're getting O.J. Simpson to be in the movie too, and I went: 'Oh no, no.' And as actors started hearing about that, they started dropping out and the movie fell apart because it was impossible to sustain."

O.J. was famously tried for the murder of his ex-wife Nicole Brown Simpson and her friend Ronald Goldman in 1994, but was found not guilty. He was later found liable for the deaths in a civil suit.