Bryan Cranston Is Set To Re-team With James Franco In An Upcoming Holiday Comedy Called Why Him? 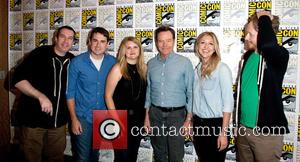 The former Breaking Bad star will play a father who travels with his family to visit his daughter at college for the holidays, but when they arrive he discovers he has to compete for his kid's attention after finding out she has a wealthy boyfriend, played by Franco.

Franco shared his excitement about their new project on Instagram.com, writing, "could not be more excited to work with my man, WALTER WHITE!!!!", referring to Cranston's drug kingpin character on Breaking Bad.

This will be the unlikely duo's second collaboration in as many years, as the two also star in In Dubious Battle, a drama which Franco also directed.