Review of The Big Bang Album by Busta Rhymes

Busta Rhymes left J Records for Dr. Dre's Aftermath and the result is The Big Bang, his first album in 4 years. If you haven't heard Busta's 'Touch It', and the various remixes featuring Missy Elliot, Lloyd Banks, Papoose, Mary J Blige, then crawl out from under that rock...

The album features a surplus of good music makers and I'm still not sure if this is based on his need for reaffirmation after the not too impressive record sales of his last effort 'It Ain't Safe No More' or just a desire on his part to let a few more people into what is looking like a massive album for the summer.

Busta and Stevie Wonder on 'Been through the storm' is one of the better tracks, as expected, with Busta spitting some of his finest rhymes ever. Q-tip reminds us of why we all fell in love with his and the ATCQ style by staying true to hip-hop on the throwback vibe of 'You Cant Hold A Torch'. Produced by J.Dilla (R.I.P), sampling Minnie Ripperton, the track also features Chauncey Black. And as expected on any Bussa Bus album you get Spliff Starr (who'll probably go down in history as the best Hype-man ever) on a few of the tracks adding his signature grunts. Busta then smoothes it out with Marsha from Floetry (who's also now signed to Dr Dre's Aftermath) on 'Cocaina'. He risks jinxing himself by titling the last track 'Legend of the Fall offs', him being a 30 something year old rapper in a business that's churning out teenage pretenders to the throne but he avoids any mumblings of him falling off as he cleverly appeals to his New York fan base with as close a kinship call as any on 'New York Sh**', with Swizz Beat hyping over a DJ Scratch banger. The album also features Kelis and her man Nas, the ubiquitous Will-I-Am and some clever sampling of Rick James. 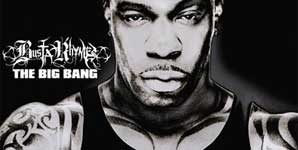 A much better effort than the last two albums he's had out. 'The Big Bang' is a lot of collaborations, the requisite club banger or two, the expected rapper turned lover track and production by one of the best in the business. You can't really ask for too much more…