C2C have been scratching records and splicing genres together for years now, providing a spectacle that is truly impressive to watch. But usually when transferring something as multi-facetted and complex as a turntable battle from the stage to a recorded audio, the results are often disappointing as something somewhere tends to get lost on the way between stage and studio. With Tetra, the Nantes-based turntable collective's first full-length record, the band have taken their time in producing a series of breakbeat tracks that they hope sounds just as good in your car or living room as they do on stage, but have the French four-piece succeeded in doing this? 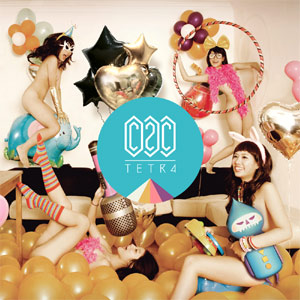 Despite having been together making breakbeat, turntabalist music together since 1998, this is in fact the first foray into making a full-length release as C2C by members 20Syl, Greem, Atom and Pfel. Aside from the members' dedication to their own turntable duos (20Syl and Greem form Hocus Pocus, Atom and Pfel form the duo Beat Torrent), their own musical genre is one that, like battle raps, is generally better left to be played in front of a crowd than through a home stereo. This is something that C2C will have thought about extensively before heading to the studio and on the finished product that is Tetra, you can tell that the boys have defined their sound to leave out the rawness and improvisation that usually accompanies a live show. The result is one that makes their sound much easier to access, but really skimps on the realness of a gig.

Rather than go for complexities though, the band have tried their hand at making what is essentially a party album, and album opener 'The Cell' is everything the opulent album cover alludes to. The album's two most prominent tracks, this and 'Happy' both exude this desired bombast and sumptuous party soundtrack vibe but blink and you might miss the group's venture into slightly exciting territory as the rest of the album is, unfortunately, both uninspiring and laden with commercial appeal.