Review of Thank You Happy Birthday Album by Cage The Elephant

Thank You Happy Birthday, Cage The Elephant's long-awaited second album, evidences a band that are entirely in control of their multiple personalities; a band that mix gentle considered melodies with the psychotic, boisterous punk aggression that they determinedly fuel into their style.

Opening track 'Always Something' crunches in with a menacing amalgamation of fuzzy guitars, dance beats and a sparse bass line emphasising beats every now and again; undeniably similar ground to their previous, self-titled album. The result is a kind of dance-infused Libertines style with a melodic, funky bass line punctuating their indie meets garage meets punk blend; the introduction to the following track, 'Aberdeen' also brings Blur to mind, not least because of its' prominent bass lines and catchy chorus. 'Indy Kidz', meanwhile, immediately drives forward with an edgy, Queens Of The Stone Age-like, anxious determination; definitely one of the more piss-taking, noisy, attitude-ridden punk blasts on the album. 'Shake Me Down', on the other hand, provides instant contrast as a down-tempo number which opens only with guitars and vocals, with bass adding another layer to the second verse. To start with, drums drop and in and out, emphasising here and there, before the track plunges into a much more familiar, safe-territory indie crunch and back out again to end as it began. 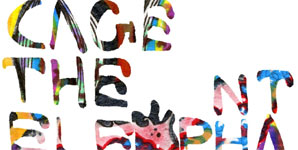 Cage The Elephant can absolutely not be faulted on variety; Thank You Happy Birthday is the stark opposite to flat nothingness as is further proven by '2024', an immediate, energetic, rough punk hurry of a track which launches into a ripping instrumental keeping up the anxious pace which no doubt allows for Matt Shultz's onstage antics. 'Sell Yourself' maintains the shouted, raucous, psychotic indie punk thrash with a mosh-worthy half-time chorus and some dalek sounding vocoder effects along the way. 'Rubber Ball' then unexpectedly contrasts the previous anxious frenzy as a delicate guitar-waltz opening with gently sung vocals; there's always an anticipation of an energetic crash throughout, but 'Rubber Ball' remains the calm token lullaby of Thank You Happy Birthday.

The driving rhythm and more mature, Strokes-esque 'Right Before My Eyes' proves further variety; the track is much more sensitive and sing-able. Similarly, 'Around My Head' later starts to fuse the spoken punk vocal with a melodic, listenable musical blend, monkey sounds and all, before making way for an interception of energetic blast. It isn't long before Cage The Elephant are back to their rough, psychotic, hurried punk energy with 'Sabertooth Tiger' and 'Japanese Buffalo', which, despite its gentle opening, soon flips back to anxious musical psychosis.

There's something for everyone on this album which hosts everything but consistency in terms of musical genre at least. Just like their live shows, the music remains unpredictable and ridden with variety; that, however, is all part of Cage The Elephant's charm. 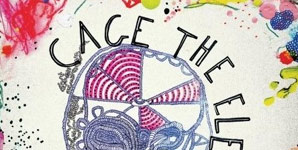