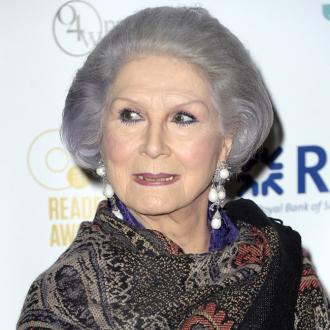 The retired fashion model - who was one of the first British people to have a sex change operation, which was revealed in 1961 at the height of her career - can't understand why Bruce Jenner would choose such an awful moniker after waiting so long to change gender.

She said: ''I think it's a terrible name, Caitlyn, why on earth she chose that.''

April, 80, believes it's tragic that Caitlyn waited until she was 65 to live properly as a woman and she also worries about the effect the intense interest on her sex swap could have on her long-term because of the ''vulgar'' Kardashians.

During an appearance on 'Loose Women', she said: ''The only thing that worries me about Caitlyn, is not just the name, it's the idea that there's going to be a commercial thing about it and that I think the Kardashians, from what I've seen, are rather vulgar. But I do wish her the best of luck.''

However, April does believe Caitlyn is ''lucky'' to have such public support from his stepdaughter Kim Kardashian West and her siblings, as well as from his own daughters Kendall Jenner and Kylie Jenner in the wake her transformation.

She stated: ''I think it's rather tragic in a way ... But at least I have read that Caitlyn is surrounded by family and that helps if you have the support of your family. That makes an enormous difference.''

April - who is the focus of an exhibition about her life in Liverpool, England, which has attracted a million visitors so far - claims the first time she ever saw Caitlyn as Bruce on US TV she knew she was a transsexual.

Speaking to The Times newspaper, April said: ''To leave it to your 60s must be hell. The funny thing is, when I was in the US in the Eighties and saw him on TV, I said, 'You're a transsexual.' He had a very feminine face, though not a feminine body - very muscular. But I had an extraordinary feeling. You're a fellow traveller.''