Lily Aldridge has revealed her rock star husband, Caleb Followill, is terrified of roller coasters but she still made him ride some during a family day out at Disneyland Los Angeles.

The 'Sex on Fire' rocker and his wife Lily Aldridge enjoyed a day out at Disneyland Los Angeles on Monday (19.01.15) and the thrill-seeking model wanted to go on as many rides as possible.

Lily was desperate to go on the attraction's famous Space Mountain coaster but Caleb's fear of fast rides meant it took a lot of convincing to get him on it.

In an Instagram post - accompanied by an in-ride photo of Caleb looking terrified - Lily revealed: ''I'm literally dying of laughter because Caleb is so scared of Roller Coasters #SpaceMountain #TearsRollingOffMyFace #LoveYouBabe @Disneyland (sic)''

The couple and their two-year-old daughter Dixie were joined at the theme park by Lily's fellow Victoria's Secret Angel Alessandra Ambrosio and her family.

As well as going on several rides the group also enjoyed meeting the Disney characters and shopping in the gift stores.

Caleb and Lily treated Dixie to a bubble wand which she loved playing with as her musician dad pushed her along.

Caleb Followill needed steroids to save voice from alcohol damage

Caleb Followill Is A Dad

Caleb Followill To Become A Dad 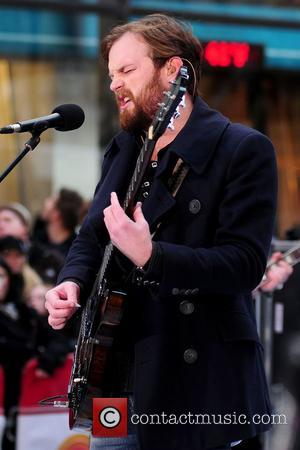 Caleb Followill To Have 'Traditional' Wedding