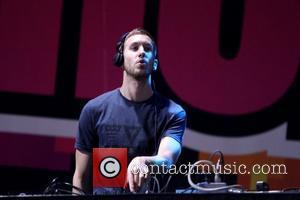 You may not know this, but Calvin Harris writes smash hits for others as well as himself. The Dumfries-born musician has been talking The Sun about writing Rihanna's We Found Love.

"It changed absolutely everything. Career-wise it was the best thing that could ever have happened," recalled Harris. "For example, in America my tune Feel So Close came out about three months before. But when We Found Love came out, the radio started playing Feel So Close like it was the single after. Then that did really well, it charted well and sold a lot of copies." His new single Sweet Nothing, which features Florence Welch topped charts last Sunday, and his new album 18 Months comes out this Monday (October 29). "It's very pleasing. I still get the same buzz, definitely. My own No1s are not that frequent, so it's a pretty special thing even though a lot of people say that you don't really have to sell that many nowadays -- it's all relative." He adds of the album: "There's a new one with Tinie Tempah, a new one with Ellie Goulding. There's a lot of different stuff -- it's half compilation of what I've done in the last 18 months and half new stuff."

Having achieved such success with his pen, Harris finds it irksome when people get his songs wrong, like the rumour that his new album features a song called Thinking About You written by JLS. "That's complete b*******, someone made that up and put it on Wikipedia. That was nothing to do with them -- me and Ayah Marar, who sings on it, wrote it," he explained.