The actress was spotted filming scenes with co-star Leslie Mann around Tribeca earlier this week. 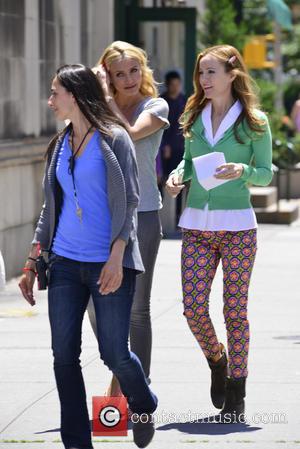 Picture: Cameron Diaz and Leslie Mann - Filming on the set of 'The Other Woman' in Tribeca - New York, New York, United States - Wednesday...

Cameron Diaz is currently working on the upcoming film The Other Woman, with the blonde-bombshell set to appear in a still-unverified role in the revenge comedy. The film is still only gradually making it's way towards the cinema screen, however it is still on course to make it's planned spring 2014 release date.

The film will also star Game of Thrones' Nikolaj Coster-Waldau and Knocked Up's Leslie Mann, with Kate Upton and Nicki Minaj also lined up to appear in their first proper acting jobs. The story follows one of Waldau's disgruntled lovers, who teams up with his wife to plot a mutual revenge when they find out that he isn't the man he claims to be, but is instead a notorious love rat who has scorned more than just the scheming two.

The pictures of Diaz were taken around Tribeca, New York City, and features Diaz with co-star Mann as they walk down a street whilst talking to one another. It is believed that Mann will star as Coster-Waldau's aggrieved wife, with Diaz possibly appearing as her friend - not another hard-done love interest. Diaz has previously been spotted filming scenes with Mann and Kate Upton on West Broadway between Chambers & Park Place earlier this year.

The Other Woman is expected to reach cinemas by 25 April 2014 in the USA, and will have a similar international release date. Nick Cassavetes is directing and Melissa Stack has in charge of the screenplay. Yes, the movie's plot does sound like the sub-plot from She-Devil, but no-one is making original content in Hollywood anymore so don't be too surprised. Diaz on the set of The Other Woman The film comes out next spring