Cancel the Astronauts - Funny for a girl EP Review

Review of Funny for a girl EP by Cancel the Astronauts

Being billed as 'one of Edinburgh's most underrated bands' by The Skinny, it is kind of obvious to see why. Sounding like a crossover between Scouting for Girls and The Wombats, it is surprising these guys have not been given the recognition they deserve. Funny for a girl, their second EP, however is very difficult to actually say anything about. One can either be positive or negative about it, but sadly we are just lost for words; it's all a bit 'meh'. 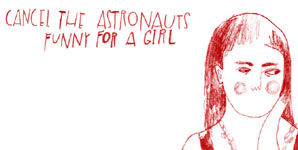 The EP tends to drudge along, track by track, and whilst the tracks are beautifully made, and it is obvious there is heart behind the vocals, it all seems a bit contrived and bland. There is nothing about any of the tracks that show that the band have gone the extra mile to set themselves apart or make themselves original in any way. The lyrics, that tend to be a bit silly and very repetitive at times, certainly don't help either. Funny for a Girl, the title track, whilst has an epic sound, with the thumping drum probably going down extremely well live, has a quite annoying chorus and again, it just screams lacklustre. Other tracks such as She said she loves somebody else and Listen are all carbon copies of songs that sound extremely familiar. One cannot necessarily and technically criticise Cancel the Astronauts for this, but one certainly cannot praise them for it either. They beg us to 'listen' but it really is nothing we have not heard before.

Standing Still is only the real time the band diverges into original territory but even this track tends to drag along and it becomes quite a chore to get to the end. One cannot slate these guys for creating bad music, because that is something that they don't do. Great pop-indie is reflective on this EP; sadly, it's just a case of having massive de-ja-vu.

Cancel the Astronauts - Funny for a girl