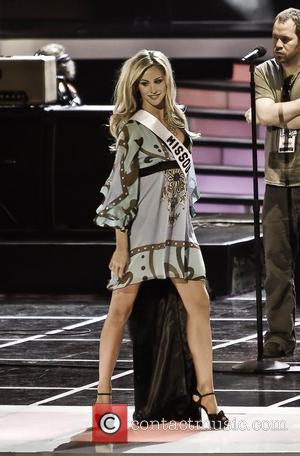 Candice Crawford, the former Miss Missouri currently working as a sports reporter for the Dallas TV station KDAF-TV, has announced her engagement to Jessica Simpson's ex-boyfriend Tony Romo, reports People Magazine. NFL star Romo began dating Crawford shortly after splitting from Simpson in 2008.
Crawford was surprised by her new husband-to-be while celebrating her 24th birthday with friends and family at the exclusive Dallas restaurant 'Five Sixty' yesterday (16th December 2010) The Dallas Cowboys quarterback revealed an engagement ring and popped the question. It is currently unclear whether the couple have a date in mind for the wedding. After finishing as runner-up in the 2007 'Miss Missouri' contest, Crawford re-entered one year later and was victorious. She went onto take part in the 'Miss USA' beauty pageant and made it down to the Top 10, however, the honour eventually went to 'Miss Texas' Crystle Stewart.
Romo is the latest in a number of Simpson's exes to announce their engagement. Her former husband Nick Lachey proposed to his girlfriend Vanessa Minnillo back in November.