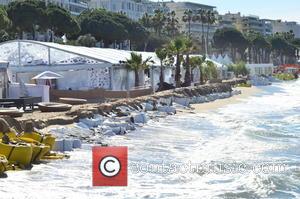 Picture: Organisers of the 66th Cannes Film Festival have placed large sandbags by the Carlton Pier and on Nikki Beach to prevent the rough waves from...

obert Redford has received overwhelming praise for his performance in J.C. Chandor's independent film, All Is Lost, which screened out of competition at the Cannes Film Festival today (Wednesday). Daily Variety described it as an emotionally resonant one-man showcase for Robert Redford. Britain's Guardian newspaper called it a tour de force performance. The London Independent wrote: Robert Redford speaks barely a word in All Is Lost, but is brilliant. And Screen Daily forecast that an awards push for Redford [is] inevitable. In the film, Redford's character is pitted against the force of a storm at sea, and at a news conference following a press screening he told reporters that he was particularly attracted by that subject. I feel that the planet is seaking in a very loud voice, he said. Nature has been so savaged ... and I don't know what can be done to stop it, because you're fighting big corporate forces ... but maybe one of the ways you can do it is to use in film in a way that's not used as propaganda as the setting behind the characters. ... But I think we should do whatever we can if you care about the planet, because it's being wasted terribly.