Supermodel-turned-actress Cara Delevingne Has Blamed Her "British Sense Of Humour" For An Awkward U.s. Tv Interview She Conducted On Tuesday (28jul15). 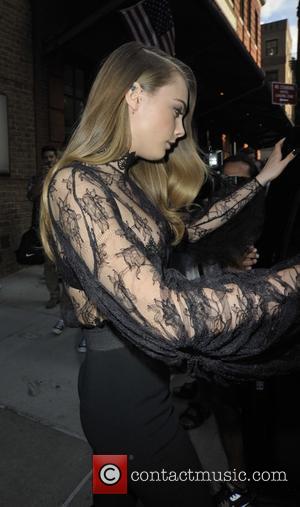 The British beauty sat for an interview for Good Day Sacramento via video link from New York, where the usually-energetic star appeared to answer questions about her new movie Paper Towns in a tired and sarcastic manner.

The interview started with a female reporter accidentally introducing Delevingne as 'Carla', and when asked if she had read the Paper Towns novel, Delevingne replied, "No, I never read the book, or the script actually. I kind of winged it... no, of course, I love the book."

A male co-presenter later took Delevingne to task over her apparent attitude, saying, "I saw you in London a couple of weeks ago on TV and (you) seemed a lot more excited about it (Paper Towns movie) than you do right now. Are you just exhausted?"

Taken aback, the model replied, "Oh... no, I mean, I'm still very excited. The premiere was last night... But I'm not any less excited than I was a couple of weeks ago. Maybe I had a bit more energy. It's the morning; don't be mean."

The chat was cut short after the female anchor added, "You seem a bit irritated, perhaps it's just us", to which the Brit fired back, "Yeah, I think it's just you."

Video footage of the interview has since gone viral, but Delevingne is adamant a cultural divide is to blame for the tense exchange.

Taking to Twitter.com on Wednesday (29Jul15), she writes, "Some people just don't understand sarcasm or the British sense of humour".