Cara Delevingne has filmed a gruesome music video after she made friends with rap group Die Antwoord. 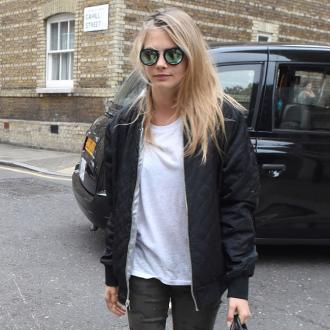 The 21-year-old model and actress has made friends with rap group Die Antwoord's Ninja and Yo-Landi Visser and will appear in the band's ''crazy and intense'' promotional film for their single 'Ugly Boy'.

A source told The Sun newspaper: ''Cara has been a huge fan of the band for years and was really excited to be a part of their latest video.

''But once she got there she realised how crazy it truly was. It was a really intense day with lots of weird stuff going on.''

The source revealed: ''It was one of the first times Marilyn and Dita had been in the same room as each other since their split in 2006 and it got pretty tense at times.

''Cara was spanking some people in bondage outfits at one point and that was a tame scene.

''The video is so graphic it will only be allowed to go up on their website.''

Meanwhile, Cara is currently filming for her role as a mermaid in new blockbuster 'Pan', a story based around the 'Peter Pan' book by J. M. Barrie.