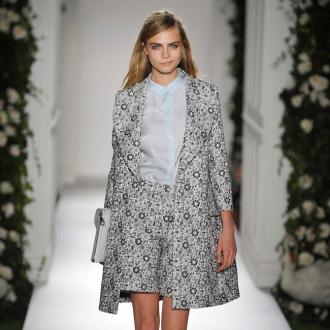 The 21-year-old model swapped numbers with the 24-year-old heavyweight sportsman after meeting him at a basketball match at London's O2 Arena last week.

The pair hit it off after posing for a picture together and have been exchanging cheeky messages ever since.

A source told The Sun newspaper: ''Cara and Anthony hit it off at the game. They chatted and she asked for a picture. They swapped numbers and have had a few texts since. Although with Cara travelling the world and Anthony training hard for his upcoming fight, there's been no time to meet.''

Meanwhile, Cara - who has been romantically linked to One Direction hunk Harry Styles - previously said she's never had a long-term boyfriend and finds it hard to find time for romance because she's so busy.

She said last year: ''It's so hard, I'm travelling all the time and the thing about me is that I'm very independent. From the age of 16, Poppy and Chloe (her sisters) have had long-term boyfriends.

''The longest-term boyfriend I ever had was when I was five. And I think the first proper boyfriend I had, I got hurt, and after that I was like, 'What the frick is the point?' I've never been in love, this is the thing. And how can I get someone to love me if I don't know who I am? I'm still figuring this out.''