Cara Delevingne Says "Shallow" Men Are Why She's Into Women

The model spoke about her sexuality in a new interview. 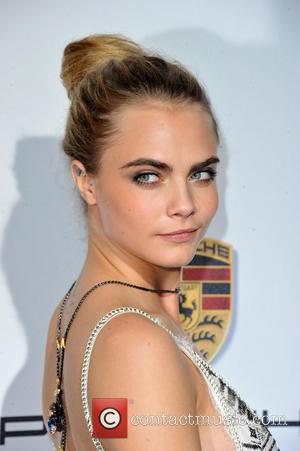 Cara Delevingne has finally addressed her sexuality in a new interview with The Telegraph magazine. Though her words don't exactly constitute a full outing, it was the first time that the model has spoken candidly about her views on dating women over men. Said to be dating actress Michelle Rodriguez, Cara and her alleged sexual orientation are constant subjects of media scrutiny.

When asked about her sexuality, Cara replied "What do I think? I think people shouldn't be scared of that. I'm young, I'm having fun, I don't want to pretend to be something I'm not." She shrugs. "So I don't really care on that matter. People can say what they want, but I'm having a good time. I know what people are doing who are my age; I just think it would be a lie to pretend that I'm not having a good time."

"The funny thing is, I always used to have more guy friends. At school, I was a tomboy and it would be me and all my guy friends. But now... I don't know. It's kind of changed quite a bit. I still have my old friends from school, but I think..."

After sighing, Cara added "I don't meet men now who just want to be my friend. It doesn't really happen that much. They're just shallow like that." The 21 year-old then discussed with a tinge of sadness how she feels that men "just want to have sex" which has put her off.

"Unless it's one of my girlfriend's boyfriends, most guys are not like, 'Oh, we should just be mates.' I think it's harder to become friends with guys because guys just want to have sex with you."

The fashion icon, who has recently been announced as the AW14 face of Topshop, is currently in the process of reinventing herself as an actress. It's no secret that Cara has always favoured a career in acting over modelling and after a string of minor roles, the big-screen adaptation of Martin Amis's London Fields, in which she stars as Kath Talent, the wife of Jim Sturgess's Keith Talent.

"I never really thought about modelling," Delevingne says now, "it wasn't something I ever wanted to do. I used to always be so angry about modelling. I was always like, 'F***, I'm never going to able to act because I'm a model.'"

On the subject of acting, Delevingne was philosophical: "I always feel that life can teach you how to act. I'm always looking at life through other people's eyes. By feeling empathy. And I do feel that I am constantly learning."

She says that modelling can interfere with acting "because it makes you so self-aware, and I have definitely had to take a minute [to get used to that]." Cara Delevingne Talked About How She Prefers The Company Of Girls To Guys In An Interview.